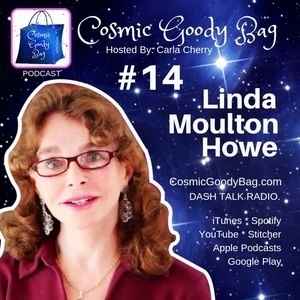 Carla interviews Linda Moulton Howe at the Conscious Life Expo. She's an incredibly popular speaker, one of the TOP experts and researchers on UFO's and an extremely generous lady.

Also... she's the "Real-life Scully" of X-Files! Linda talks ET's - which species we KNOW exists, the Regan ET briefing. She describes the White House screening of "Close Encounters" including what Regan said to Spielberg about the movie....STRAP IN!

A professional journalist, Linda holds a masters of Communications from Stanford University and has devoted her work - writing, film, TV/radio and reporting to science and Real X-Files information (Check out her website Earthfiles.com).

This was an incredible interview! She reveals - NEW findings in Antarctica, ANCIENT hieroglyphs recently found there under ice - with a tie-in to the Natzi's (Black Sun). Huge information that the world may not be ready for! Natzi's and ET's. It's the stuff of Sci-Fi movies - but wait until you hear her describe what's there.

She also goes into "Oumuamua" - an object that could be a UFO - recently discovered by Avi Loeb - Harvard's Astronomy chairman who is fighting to get the info out (while taking harsh criticism from the academic world). He believes the world deserves to know and he's right (and risking his rep for it).

Sit back and enjoy the INCREDIBLE Linda Moulton Howe!