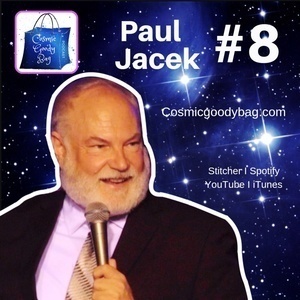 Paul Jacek is an intuitive, comedian and Dearly Departed expert. This man KNOWS his dead people.

He's the resident Docent at the Dearly Departed Tours and Museum and has worked in some of the country's most famous haunts like the Queen Mary, The Shining (real life) hotel, The Comedy Store, Pantages Theater and the Disney Concert Hall.

He tells several ghost stories but Carla personally gets spooked when Paul recounts tales from working at The Comedy Store in the 80's. It's all fun and games until....well you'll have to listen to find out - but YOU'VE BEEN WARNED

He describes what it's like to see energies and how to tell the difference between ghosts, spirits and imprints.

Paul - a very gifted tarot reader - describes the meaning of Mythic Tarot, and gives tips on how to be more in tuned and with the natural world. He discusses Mercury Retrograde, the moon, following your intuition and more.

PLUS - He's VERY FUNNY and entertaining - an EXCELLENT addition to your holiday party (Comedic Tarot Reader). Paul is also available for readings at The Liberate Emporium and can be found on Facebook here: https://www.facebook.com/paul.jacek