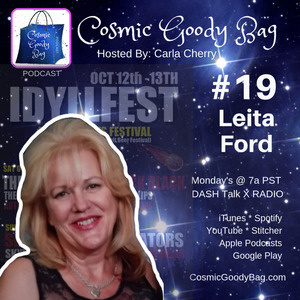 Leita Ford is the co-founder and host of the IDYLLFEST MUSIC & ART and CRAFT BEER FESTIVAL coming up on October 13th & 14th.

The festival will bring much needed funds to the mountain residents who got hit hard by last year’s fires and floods.

Leita Ford shares her incredible, up close and personal, UFO childhood experience - a summer filled with UFO's in the sky.

Leita also worked on The USS Princeton and was close friends and colleagues with the US Navy Pilots who witnessed UFO's in 2004. A few confided in her about witnessing craft so foreign to them and the feelings that come with being sworn to secrecy. She recalls them being terrified of telling and how heroic it is that they've come forward and what that means for all of us.

Leita also recalls the summer of UFO's she, her brother and boyfriend along with numerous other people from Charleston South Carolina saw. She tells the story of the one fateful night her crew got a personal visit and how it altered her life forever. Once you've experienced something other worldly your mind has become opened to infinite possibilities - which is what Carla hopes you'll take away from this show.

Leita talks about the mentors she sought out and how her journey has lead her to a beautiful, spiritual space (old dairy farm) she's opening now and sharing with others. She's opened her door to the IdyllFest Music & Arts Festival, which was created with the community in mind to bring back commerce, music and Inspiration from the surrounding community which was hit hard with fires and flooding.

Take a trip up to Idyllwild and support the town while listening to sweet music and drinking craft beer or wine.